THE SCHOOLBOY AND THE SOLDIER

This story about a Christmas letter sent by a Schoolboy in Liverpool to a soldier at war first appeared on the Scottie Press website in the St Sylvester's section. I only noticed the story and letter in June 2012, but I am informed it has been on the website for a number of years. Ron Formby who ran the Scottie Press has sadly now retired from the paper due to ill health so I contacted the present editor Mike Quinn. Mike is fairly new to the paper, but has told me he will look into the story and see if he can find out any more details about the letter.

The Scottie Press noted that the soldier who the child was writing to was serving with the Royal Army Medical Corps ( RAMC ) nothing on the letter we see mentions this so someone at the newspaper must have seen the reverse of the letter or the card where the address with RAMC would have been written. Hopefully the original letter and card will surface again in time and give us more clues.

The Scottie Press also asked for information on the child who wrote the letter. Due to the help of forum members on Rootschat and The Great War Forum we now know the life he lived and have details about the soldier he wrote too. I must say a special thank you to Carole W at Rootschat who has gone out of her way to help me find details, without her help this page would never have came about.
So let us now concentrate upon the Christmas letter that was wrote back in 1915. 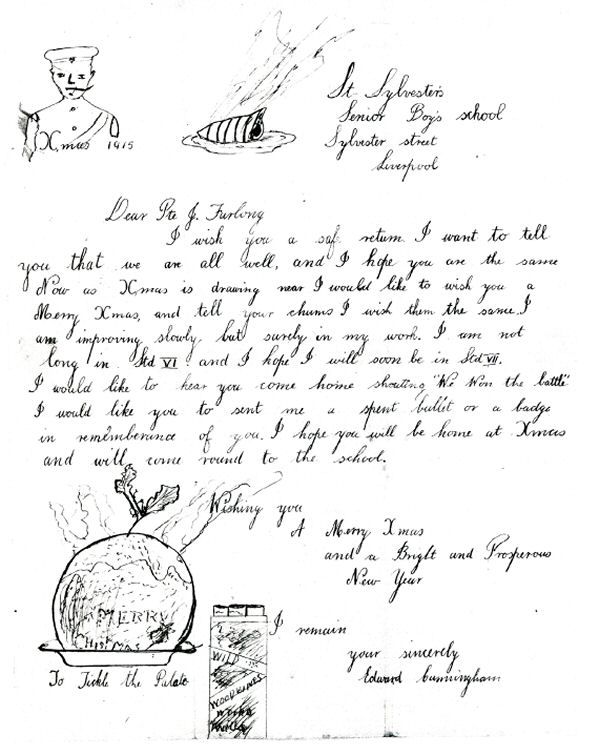 The newspaper added this text along with the letter.

" This hand written letter, along with a printed Christmas Card, was sent from St Sylvester's School in 1915 to a Pte Furlong who was serving in the RAMC . Pte Furlong was thought to be serving in the trenches at the time. The letter is signed by a pupil Edward Cunningham. It is not known by the Scottie Press whether the two were known personally to each other, or whether the practice of sending such morale boosting items was a government sponsored initiative. We are also keen to trace the fate of Edward Cunningham, born circa 1900 " 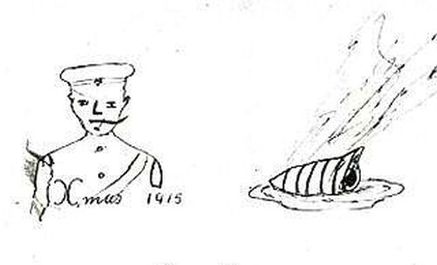 The drawings that Edward made on the letter. 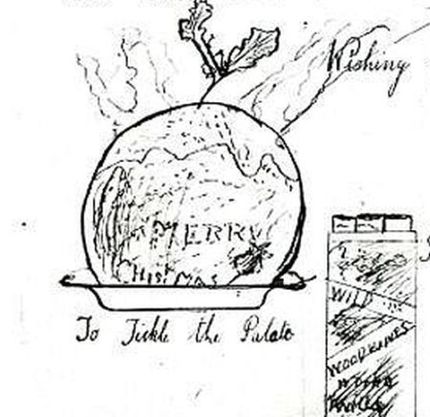 Apparently, the teachers at St Sylvester's School wrote the letters but the children had to copy them as a handwriting test. Standard V was 10/11 year olds so Standard VI would have been 11/12 year olds.

An Edward Hugo Cunningham was born 5 December 1904 and was christened at St Sylvester's RC church on 11 Dec 1904. His parents being John Patrick Cunningham and Ann Bradley. The priest had added the information in the church records that Edward married Dorothea ( Dorothy ) Maria McGuiness on 12 Feb 1936 at St Frances Salles ( Salles? hard to read) It could be St Francis De Sales church in Walton. Records show that Edward and Dorothy went on to have five children of their own.

The 1911 census shows Edward aged 6 living at 24 Hopwood Street, of course Hopwood street is very close to where the school stood. His father John is listed as working as a Carter, his mother Annie is the homemaker, both are aged 48. Edward has a number of siblings, John 22, Joseph 20, Annie 17, Vincent 15, May 13, Margaret 11, Sylvester 8, and Augustine 4. All family members were born in Liverpool.

There is death record in 1974 in Liverpool North for an Edward Hugh Cunningham with the same date of birth. I would imagine Hugo was the latinized form of Hugh. So he appears to have remained in the area.

So we know who the young boy who wrote the letter was, we know he later married, had children of his own and stayed in the Liverpool area up to his death in 1974. But what about the soldier that he wrote to? Without a document that links the two or a family member who can tell us they knew each other we can not be certain of any finding.

A number of people have told me that they have letters and cards written by their parents or grandparents who attended St Sylvester's school. The teachers had wrote them out and the children had copied them as a writing test. Nearly all of these cards tend to be addressed to Mum and Dad, Nanna and Grandad etc, so somebody that the child knew. This could be the case for Edward and he may well have known Private J.Furlong and chose him for his writing test. Of course he may well have been an imaginary soldier created just for the test, but look at the drawings on the letter, young Edward has put a lot into them and it is my belief that he knew this letter was going to be received by the soldier.

There was a number of "adopt a soldier and write to him" schemes during WW1. Often they concentrated on soldiers who had no kith or kin in the UK and might therefore not get written to otherwise. There was one for example for British women to write to Belgian soldiers whose family were in occupied Belgium and unable to write to them.

So did Edward write to an adopted soldier? if so only one man fits the bill. Private 2919 John James Furlong, RAMC. He joined up on 26 May 1915 listing his address as 11 Farmbridge Road, Maldon, Essex. By October 1915 he had been sent out to Egypt. He survived the war. The 1911 census has him working as a Plumber and living at the same address with his parents and siblings, so barring some terrible bad luck with family deaths I doubt he would have needed to receive letters from the Adopt a Soldier Scheme.

So we now have to consider if Edward knew the Soldier he was writing to. If we look at the writing in the letter we can take the lines '' I would like to hear you come home shouting We won the battle " and " hope you will come round to the school " Edward also asks for a spent bullet or badge from the soldier for remembrance of him. It appears that Edward has met him before, was he a family member or friend, a man from his area or an old boy of St Sylvester's school who had come along in uniform and impressed young Edward? If it was a local man that Edward was writing too then we do have one man that fits the bill, and he lived right by Edward.
61797 Patrick Joseph Furlong RAMC (91st Field Ambulance) who went to France 23/11/1915. He was a 26 year old distillery assistant who lived at 14 Furlong St, off Hopwood Street. He survived the war.  He is Patrick Joseph on his service details, he is Patrick on the census returns, but a check of the births shows he was born Joseph Patrick Furlong, plus it was not strange then or now for people to use their middle names. A death record for 1942 in Liverpool appears to be him.

So is Patrick/Joseph the man who Edward wrote the Christmas letter too? we can never be certain, but he ticks so many boxes, living almost in the same street as Edward, serving with the RAMC and being overseas at the time when the card was written. I believe there is a fair chance he is the correct man.
Others who could have fitted in are listed below, though it is doubtful that any of them will be the soldier Edward wrote to.

There is a WW1 service record for a John Furlong age 48 at enlistment - address looks like 27 Everton Crescent, discharge address in 1917 was 34 Hornsey Road Anfield. His service number was 1805.

Both the above men however did not serve with the RAMC.

The 1911 census shows a John Furlong aged 21, a Pawnbroker's Assistant of 28 Louis St, off Scotland Road. Though no service record has come to light for this man.

As I keep saying though, nothing can be certain on the soldier. Myself I believe that Patrick Joseph Furlong listed above is very likely the man, from the area and serving overseas with the RAMC at Christmas 1915. However I will keep on trying to find out information and welcome any input from anybody who can help.

I would like to thank The Scottie Press, Rootschat and The Great War Forum for all their help. Please enjoy the letter from a young boy to a soldier at war. It is a wonderful piece of history.