My Great Grandparents John Owens and Sarah Ann Cain were married at St Anthony`s Church, Scotland Road, Liverpool,  on 26th August 1905. John had been born in Bootle and had lived at 43 Brasenose Road in Bootle, he lived here with Sarah after they married.  They had a son Austin in 1908, and my Grandmother Ellen in 1912, three other children where born but sadly died before 1911.

John Owens had served in the Army in India.  He returned home and found work as Coal Heaver with the Cunard Line, and moved the family into 145 Burlington street, off Scotland Road.  John remained on the army reserve list and was called up during WW1. Sadly he was  killed in action while serving for the 1st battalion of the East Lancashire Regiment in Ypres. Private John Owens 7021 Died aged 37 on 13th May 1915. He is remembered on the Ypres Menin Gate Memorial. John`s regiment was present at the Christmas Truce of 1914. 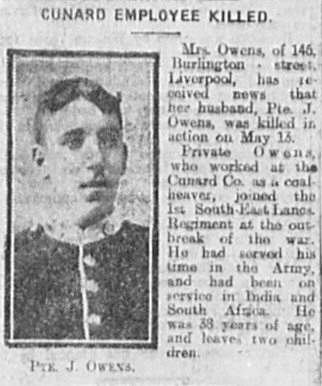 Private John Owens ( age given by mistake as 38 ) the newspaper article list John as serving in India and the Boer war, yet as you will see he served his time in India. Unless another record turns up then serving during the Boer war must have been an assumption by his wife Sarah or his employers Cunard.

No WW1 service records for John have survived, but due to the very kind help of a man named Ken, I have recieved his army service records prior to the great war. John enlisted with the East Lancashire regiment in London on 24 June 1896, giving his age as 18 years and 7 months and his occupation as a Steward. He is 5 feet 4 1/4 inches tall, weighs 131 pounds and has a chest measurement of 33 inches. His complexion is fair, eyes Grey and hair Light Brown. John's distinctive marks are listed, his eyebrows meet, he has tattoed initials E.K on his forearm, a ring on his little finger of his left hand and scars to both legs. His next of kin is given as his father James of 43 Brasenose road, Bootle, Liverpool.

John's Signature On His Enlistment Papers.

John is posted as private 5101 with the East Lancs 2nd Battalion. On 11 September 1897 he is posted to the depot in Preston, remaining there until 18 December 1897 when he returns to the 2nd Battalion. Two days later on 20 December he sets sail for India. arriving in Rhaniket he also spends time in Chakratta and Jullunder, Punjab ( Modern day spelling is Jalanhar )

On 4 July 1901 he is granted an extra 1d a day pay, then on 19 February 1903 he is confined to prison and faces a District Court Martial on 6 March charged with " Wilfully injuring his arms " John is sentenced to 122 days with hard labour, the sentence is later reduced to 56 days. John also loses his extra 1d a day pay. He is released from prison back to his regiment on 30 April 1903. On 7 January 1904 he sails from Poona and arrives in England on 30 January.

On 3 February 1904 at Gosport, John is transfered to the 1st class Army reserve after spending 7 years and 225 days as a full time soldier. His description on transfer gives his age as 26 years and 1 month, and he has grown to 5 feet 7 inches in height. John's chest measurement now reaches 38 inches and his waist 36 inches, with a hat size of 22 1/2 inches and boot size 8.

The charge of Wilfully injuring his arms meant that John was carving his rifle stock, either creating a picture or writing names. probably through the boredom of sitting around in India with not much to do. 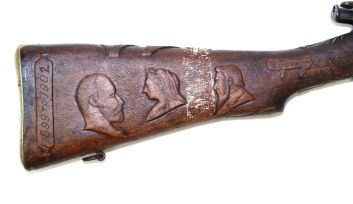 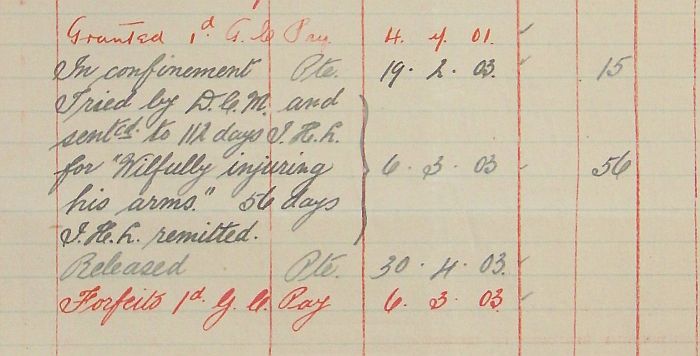 Details Of John's Imprisonment For Wilfully Injuring His Arms. 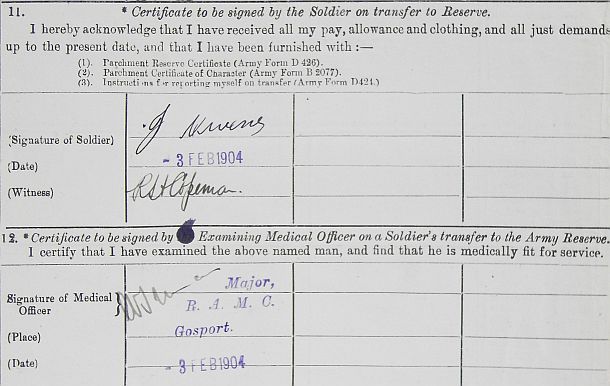 John's Transfer To The Army Reserve.

One interesting thing is that John's WW1 service number with the East Lancs 7021 would have been issued to a regular around 1900, So John must have been given this number after transfering from full time soldier to ist class reserve in 1904. John rejoined the East Lancashire regiment at the start of WW1. His regiment was took part in the famous Christmas truce of 1914 while they where positioned in trenches near Ploegsteert Wood, just 400 yards away from where the game of football with the German soldiers took place.

One of the men that died alongside John on 13 May was Private Tom Brandon. You can read about him on the Baxenden Lads website at     http://www.microloft.co.uk/bax_lads/brandon.htm
The actor Matthew Kelly made a TV programme called " My Family At War " Where he travelled through France and Belgium tracing the footsteps of his Great uncle Albert Nugent who fought and was wounded on the battlefields while serving with the 1st Battallion of the East Lancashire Regiment. Matthew later visits Germany where Albert was sent after being taken prisoner and sadly where his life was to end in 1917.

Watching Matthew's programme I realised that his Great uncle Albert Nugent and my Great Grandfather John Owens where fighting alongside one another in the same regiment. I became very interested when Matthew visited Mousetrap Farm as this is where John Owens gave his life. I made sure my family members watched the repeat of the programme, they and I where very moved to see where John had fought and died.

Through his agent myself and Matthew made contact with each other 94 years after our ancestors had served together in that horrific war. I thanked Matthew for making the programme and told him how special and moving it was for my family to see some of the places that John had fought at, and of course Mousetrap Farm where he died. Matthew has since viewed this website and has sent me the following letter.

" I've looked at your family website and think its great-there must be hours of work and dedication that has gone into that achievement. I would be honoured if you would like to make a note that your Great Grandfather, John Owens, and my Great Uncle, Albert Nugent, served together in the same regiment. We can only wonder at what experiences they shared- good and bad.

It was amazing going over to France to trace Uncle Albert's path through the war, and far more emotional than I expected. Mousetrap Farm has an atmosphere all of its own- I'm glad that it meant something to your family and that you could see where John served and died. We owe them all such a lot and should always appreciate and learn from their sacrifices.

Anthony, your family has given so much over the years- It was fascinating and a privalege to read about them-I know that you are justly proud of them all.

Thanks so much for contacting me, with all best wishes-Matthew Kelly "
You can read about Matthew's programme here     http://www.bbc.co.uk/manchester/content/articles/2008/11/04/041108_remembrance_kelly_feature.shtml 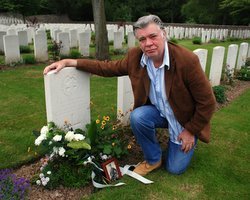 Matthew Kelly pictured at the grave of his Great Uncle Albert Nugent in Niederzwehren Cemetery, Germany.

We arrived in Ypres ( Ieper ) on Sunday 4 March, within two hours our friend Sabine had picked us up at our hotel driven out into the nearby countryside to  Mousetrap Farm. 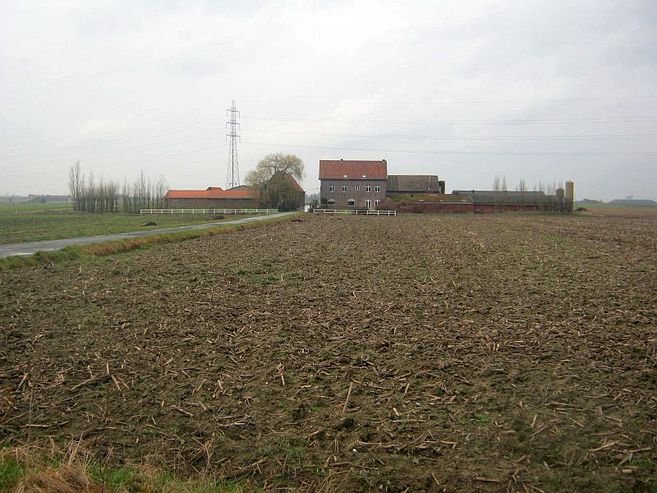 Mousetrap Farm, now a peaceful and calm location. In May 1915 the Second Battle of Ypres was just weeks old and this was the scene of intense and vicious fighting. My Great Grandfather John Owens was here with the 1st East Lancashires and took part in the conflict, on 13 May while attacking the farm he was killed in action. John has no known grave and is remembered on the Menin Gate Memorial in the town of Ypres. John may be one of the unknown soldiers buried in one of the many Ypres war cemeteries or he may still rest here in these fields. 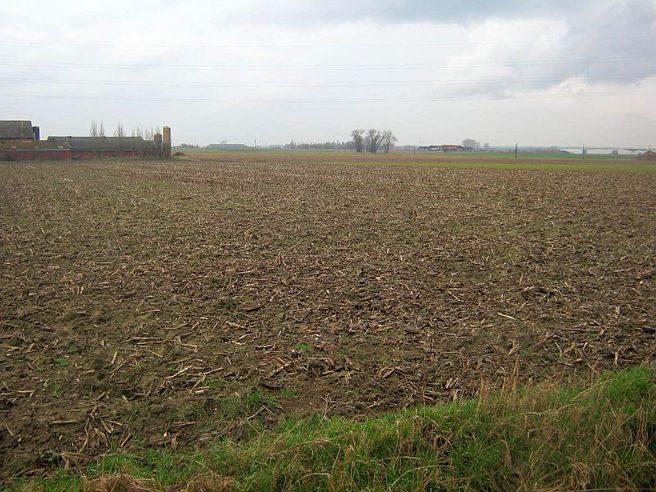 This is where we left the Poppy Cross to remember him. The sadness I felt as I looked out upon the ground where John had died was immense. 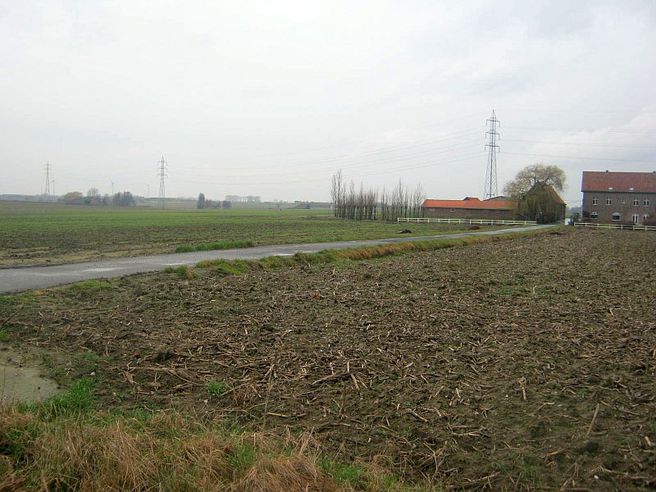 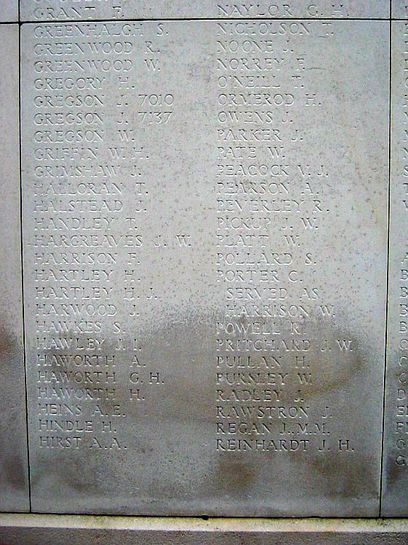 John Owens name on the Menin Gate Memorial. The men listed alongside him are all from his regiment, he would have known many of these men. 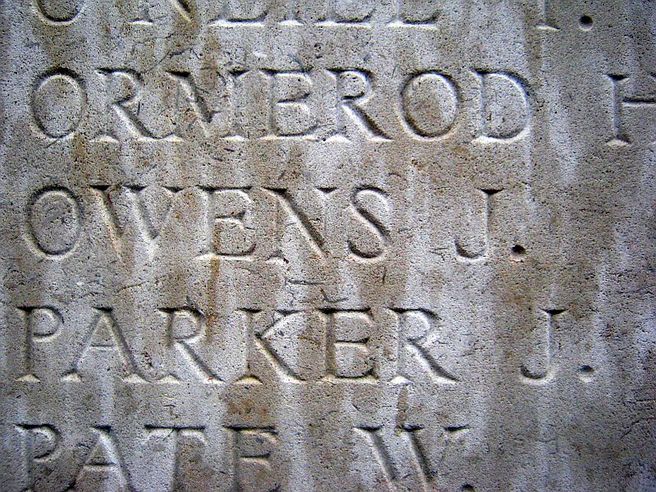 The Menin Gate Memorial in Ypres. It list the names of 54,409 men who died in the Ypres Salient and whose graves are not known. The memorial was designed by Sir Reginald Blomfield with sculpture by Sir William Reid-Dick, it was unveiled on 24 July 1927 by Lord Plumer. 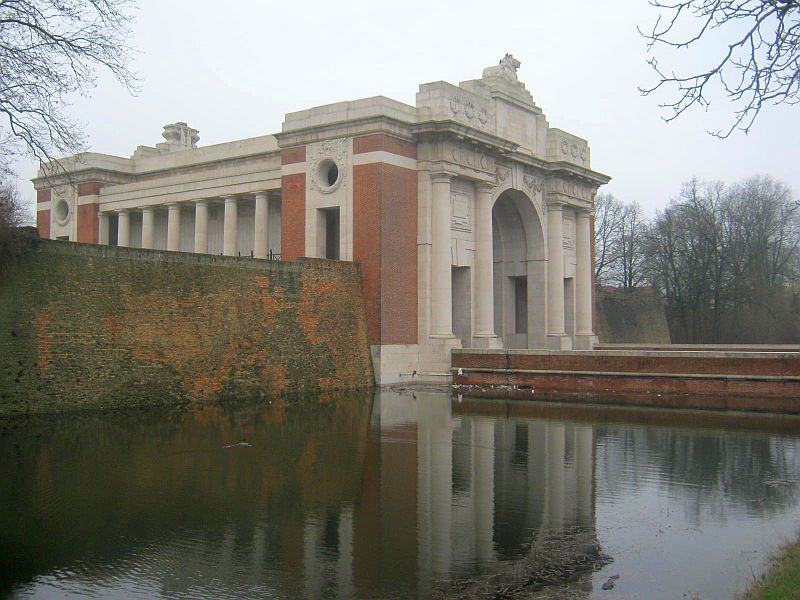 The site for the memorial was chosen because of the hundreds of thousands of men who passed along this road on  their way to the front lines of the  battlefields. It remembers the casualties from the forces of Australia, Canada, India, South Africa and United Kingdom who died in the Salient. 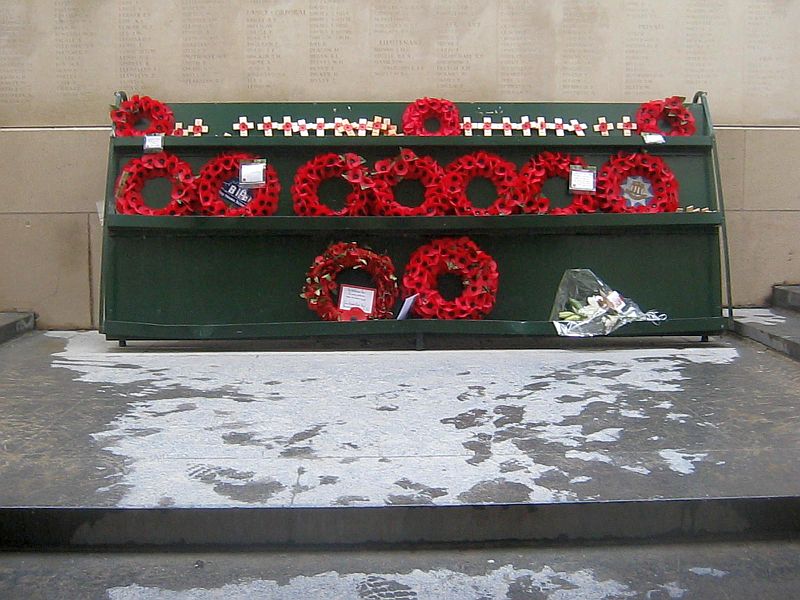 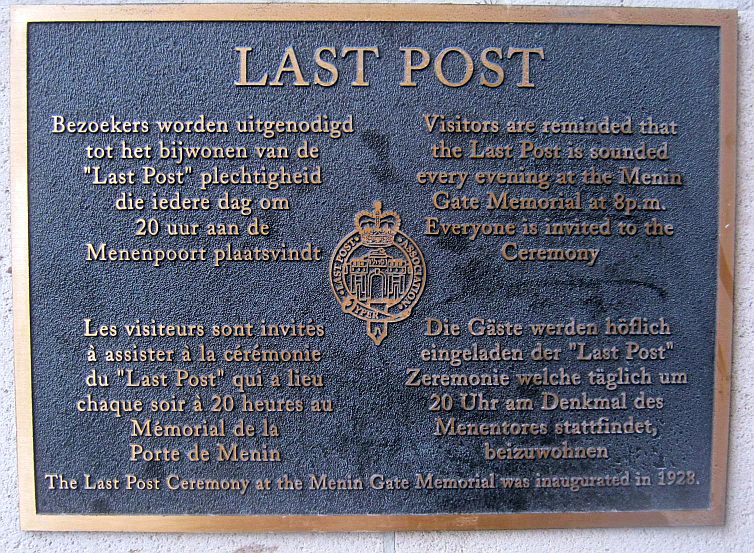 Each night at 8 pm the traffic is stopped at the Menin Gate while members of the local Fire Brigade sound the Last Post in the roadway under the Memorial's arches. This tradition dates back to the opening of the memorial. The Fire Brigade had remained in Ypres with the forces during the war when the locals were evacuated for safety, every night they heard the British play the last post and this is the tribute they gave to them on the night the memorial was unveiled. It was thought so moving that they played it again the following night and the tradition still goes on today. 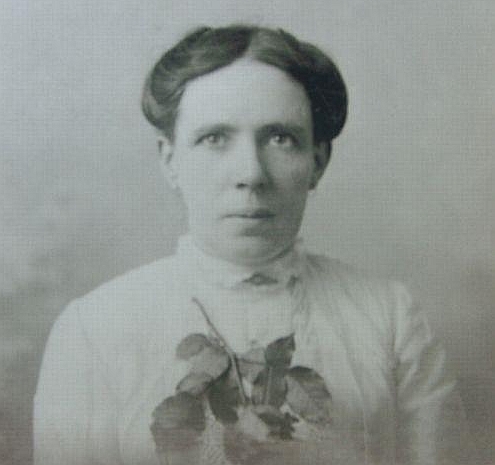 John's wife Sarah. She later  married Richard Sudworth on 14th October 1916 at Our Lady Of The Reconciliation Church in Eldon Street, with whom she had a son called Richard ( uncle Dick ).

My Dad remembered his Nanna Sarah, and said that when the air raid sirens went off in WW2 she would hurry everyone, including the men, into the Air Raid shelter that was in their road ( Kew Street ) then she would go back to her flat on the 2nd floor and hide under the kitchen table. He recalls she was a cleaner at the Westmoreland Arms ( later known as Dolly Hickey's Pub ) and how she would take him into St Anthony's church every day, where she would clean the pews. He would moan " nobody spent more time in that church than me, not even the priest ".

Then he told me about the time when he was waiting for her to come home one February night in 1945. My dad was 6 and heard his Nanna Sarah singing in the street ( after a few drinks in a local pub ) in his excitement he raced along the landing to the top of the stairs, looking down he saw his Nanna climbing the steps, then to his horror he saw her fall backwards. Sarah banged her head in the fall and sadly she never recovered and died in hospital. Sarah had suffered from fits in her life and when she took one a spoon was placed into her mouth to stop her swallowing her tongue. Her Grandaughter Anne has that spoon and you can see teeth marks in it.