On the 2nd of November 1908, John Hogan (Born Dublin) married Mary Flaherty at St Josephs Church in the Scotland road area of Liverpool. They set up home at 14 St George Terrace, Comus street. Times where hard but they found work, John as a Pressman and Mary as a bag mender at the nearby docks. In 1910 their first son John was born, followed 2 years later on 1st August 1912 by my Grandfather Bernard. A third son Thomas came along in 1915.

John joined the Militia with Lancashire Fusiliers and on 2 September 1914 he joined up full time for war service. He became part of the 4th Battalion Lancashire Fusiliers as private 4436, and was posted for war training at Barrow. On 28 January 1915 While at Barrow John received a crush injury to his right foot, which after hospitalisation warranted his discharge under Kings Regulations  as being "no longer physically fit for war service". In consequence he was discharged on the 20th October 1915, having served 1year and 49 days with the Colours. That of course should have been the end of John's war service, but while drinking with a friend in a public house he made the decision, no matter how rashly, to try his luck again. His friend decided to enlist also, but was turned away as unfit.

Army Medical Report Showing that John's Foot Was Wounded By Barbed Wire. It List Him In Hospital In Barrow And Liverpool Where He Is Operated On.
John was noted as 5 feet 8 inches tall with a chest measurement of 36 inches. He had the bust of a woman tattooed on the inside of his right wrist. His wife Mary also had this tattooed on her arm so they must have had them done together. A nice sign of their affection for each other.

By May 1916 conscription was in full swing, but by voluntary enlisting into a unit of your own choice, and by omitting to tell them you had served in the Militia/Special Reserve infantry prior to 1914, then you would lengthen your odds to survive, as by this time it would be well known that being in the infantry had a low rate of survival. John re-enlisted into the Royal Garrison Artillery as a Gunner in June 1916. His was a voluntary enlisted as opposed to conscription, plus he left out the fact that he had previous service in both the 5th(Militia)Bn,L.F. and the 4th(E.R.)Bn, L.F., as well as seriously injuring his foot to the point of discharge a year earlier.

Now under Kings Regulations his enlistment into the RGA was actually "fraudulent", as he seems to have failed to declare all of this to the recruiter, and had he survived it's possible that he would have had to forfeit his medals because of this, although he would have eventually got them back in the 1920's pardon by H.M. the King. John was posted to the R.G.A on 31 July 1916 and on 7 November 1916 he became part of the 285th Siege Battery, who he served with until 27 February 1917 when he joined up with the 299th Siege Battery. He arrived in France with the 299th on 5 April 1917. 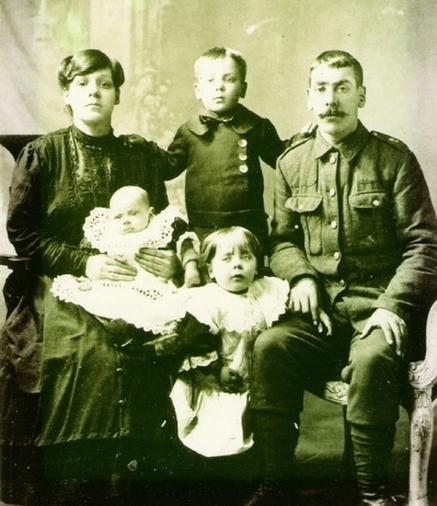 The above photograph shows John and Mary Hogan with their three boys. John is the child standing at the back, Thomas is the baby and my grandfather Bernard is at the front holding his fathers hand. It looks like it could be for the christening of baby Thomas. As John did not join the RGA until 1916, I would assume he is wearing the uniform of the Lancashire Fusiliers.

John's Signature On His Enlistment Papers.

In March 1917 Mary gave birth to a daughter Winifred. John was fighting in Europe having joined the 299th Siege Battery of the Royal Garrison Artillery. A photograph of the baby was taken and sent in a letter to John, but sadly John died before it arrived. On 24th June 1917, Gunner John Hogan 112913 was killed in action at Ypres. He never got to see his Daughter. John is buried at Ferme-Olivier Cemetery in Belgium. His daughter Winifred visited the grave of the father she never knew when she was in her 80`s.

Ford cemetery in Liverpool has a grave for Mary`s family, The Flaherty`s. On the bottom of the headstone is the inscription. "also Gunner John Hogan, R.G.A. Brother-in-Law of the above. Who was killed in action in France, June 24, 1917 aged 32 years" ( so I guess Mary never knew he was buried in Belgium ) It is very moving that they wanted his name put on the headstone. 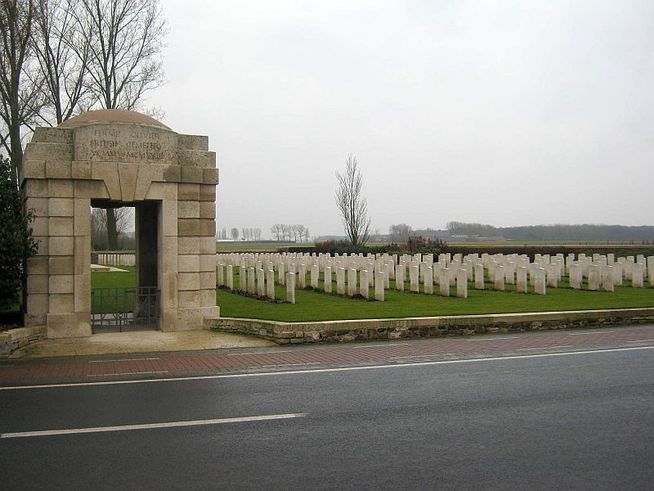 This cemetery was widely used by Field Ambulances between 9th June 1915 and 5th August 1917, the 62nd, 9th, 11th, 129th and 130th Field Ambulances all being based here during this period. Throughout this time, the village of Elverdinghe, where the cemetery stands, was just within the range of the German Artillery, and a mass grave in Plot II Row E contains the remains of 37 men of the 3rd Bn. Monmouthshire Regiment who were killed whilst on parade by a single shell fired from a naval gun in Houthulst Forest on 29th December 1915. The graves in Plot III run in order of the date of death and show the successive occupations of Elverdinghe Chateau by the 38th (Welsh) Division, the Guards Division and units of the Royal Artillery. ( CWGC information ) John is buried in Plot III 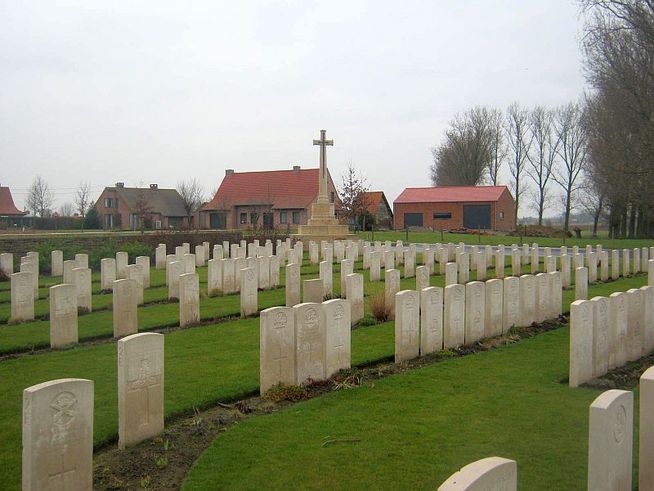 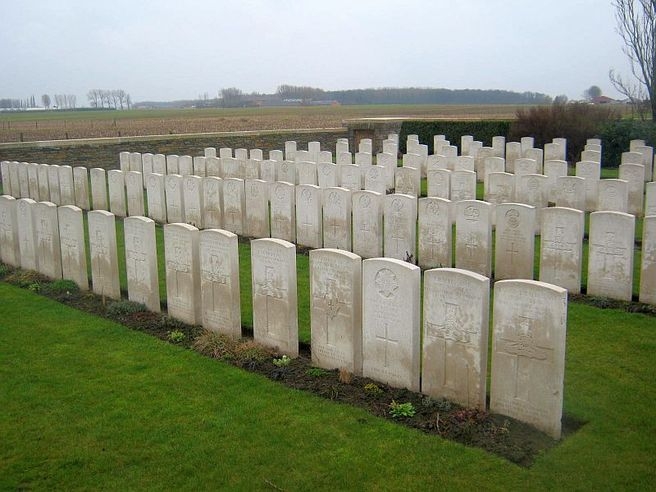 The fields in the background were excavated in 2011 and a lot of WW1 items were recovered. 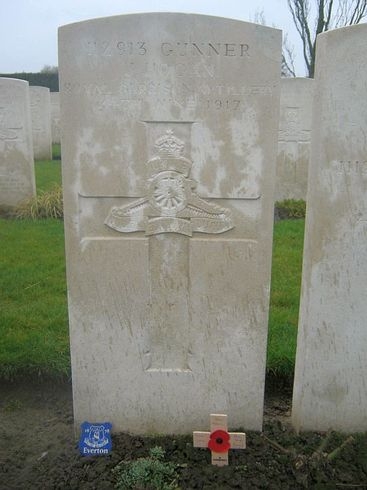 John Hogan's grave. We visited on 4th March 2012. The Everton badge? My father died in 2006 and he was a big Everton fan, one of the flowers for his funeral was in the shape of the Everton badge and this badge here was attached. The flowers went on my dads grave then we put them alongside the Dixie Dean statue at Everton's football ground and I removed the badge. In 2007 we visited my Grandfathers grave in Italy, he was killed during WW2, he was my dads father and the son of John above. Grandad was an Evertonian and we put the badge on his grave in Italy before bringing it back home. It was my intention that if I visited John in Belgium then I would place it here and leave it here which I did. I have no idea if John supported Everton but football does not matter as the badge is just my link between my Hogan men. 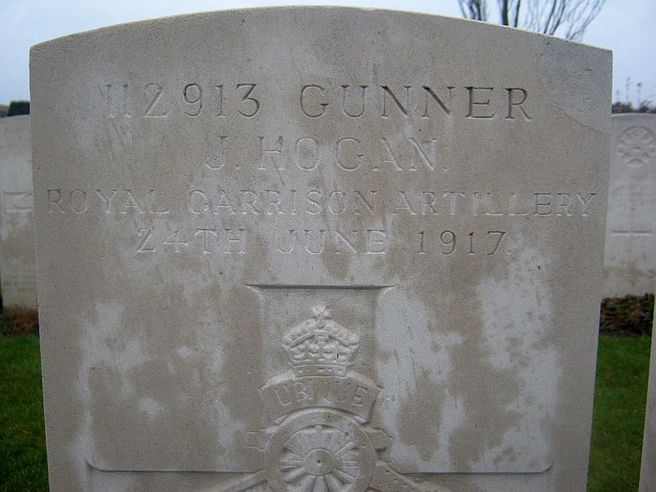 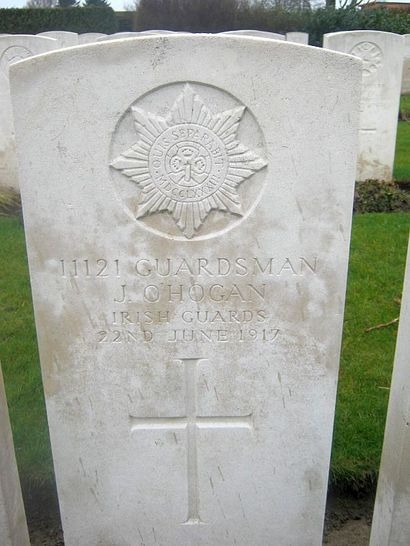 Buried next to John is this man, J. O'Hogan, who died two days before John, only the letter O in their names seperates them. 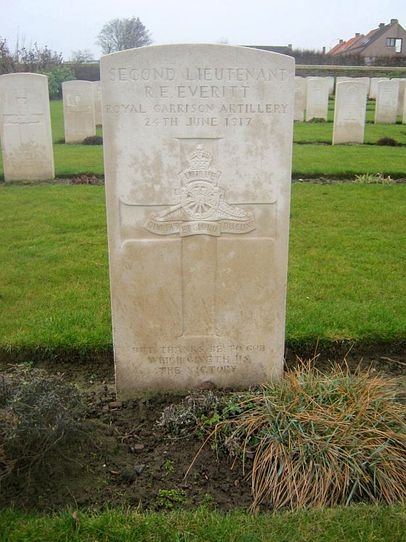 This man is Rupert Edward Everitt, he was serving with John and was killed at the same time as him. 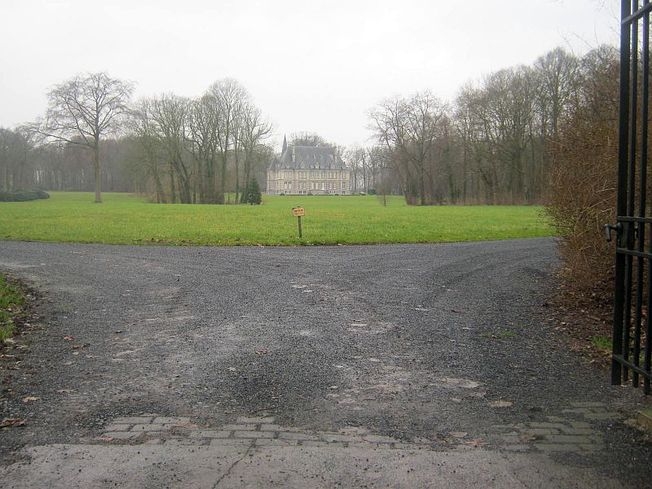 The Elverdinghe Chateau, located very close to Ferme-Olivier Cemetery. John Hogan and his regiment spent time here in 1917. The original Chateau was destroyed by shell fire but this newer building stands on the same spot.

The war diary of the 299th siege regiment, has survived for June 1917. It gives a good insight into what John was involved in. On 5th June his battery supported a raid by the Royal Inniskillings at 10.30 pm. They where involved in the battle of Messines Ridge and supported the 2nd Army who succesfully took the ridge on 7th June. The battery moved to Poperinghe on 9th June, and suffered heavy shelling by day and night on 15 June. On 20th June the battery recieved instructions to report to X1V Corps, and proceeded to a new postion alongside a Canal Bank, where they came under the command of 85 HAG. The next few days was spent preparing their new position until they came under shelling on the morning of the 24th. Sadly as you can see below. John Hogan was killed in the morning attack, and buried the following day.

John's War Medals And Plaque That His Wife Mary Had Framed And Hung On The Living Room Wall. John's Grandson also Named John Hogan, would Play With The Medals As A Child. When Mary Passed Away She Left Them To John Who Has Them On Show In His Home.

A Reciept For John's Medals Signed By His Wife Mary

Mary was made a widow at the age of 33 with four children to bring up. she managed to keep them clothed and fed. It is said that Mary never accepted John`s death and did not forgive him for rejoining up. She never remarried. Mary never owned a TV set, but would listen to the radio and keep herself up to date on all the latest news and even read the stockmarkets. She passed away in 1978 at the age of 94.